Share this tribute
Memorial Candles Lit for Clyde | SEE ALL
Light a Candle
"We are honored to provide this Book of Memories to the family."
— Swartz Family Community Mortuary And Memorial Center
"May you now rest peacefully with your beautiful wife. Know that that you are loved and missed."
— Charlene Franklin
Funeral Details Memory Wall Photos & Videos Send Flowers

Print
Clyde Willis Daniels, 95, of Franklin, IN, passed away Monday, August 6, 2018 at Johnson Memorial Hospital in Franklin, IN. He was born August 7, 1922 in Pike County, Kentucky to Clyde and Mae (Baldridge) Daniels. Clyde graduated from Whitesburg High School in Kentucky and worked in the coal mines as a young man. He joined the U.S. Army Air Corps as a nose turret gunner and flew 35 missions in WW II in the European Theater. Clyde married Ferne (Williams) Daniels on April 22, 1950 in Letcher County, KY and they lived in Miami, FL for 30 years where he worked as an aircraft mechanic.
In 1978 they moved back to Franklin, IN, with their daughter to be near family, he was employed at Holbrook Manufacturing & Welding for over 20 years. He enjoyed biking around his neighborhood, fishing, and reading. He was a member of Franklin American Legion Post #205.
Survivors include his daughter Cindy Weddle and son-in-law Bart Weddle of Franklin, IN; grandson Daniel Weddle of Franklin, IN; and several nieces and nephews.
Clyde was preceded in death by his parents; his loving wife Ferne (Williams) Daniels; his sister Mildred (Garnett) Craft; and a brother Herman Daniels (Norma).
Bob Tolliver and Brian Tolliver will conduct a memorial service Saturday, August 11, 2018 at 10AM at Swartz Family Community Mortuary and Memorial Center, 300 South U.S. 31 (Morton Street) in Franklin, IN. Friends may call Friday 4-8PM at the mortuary. Burial will be in Greenlawn Cemetery with military honors being conducted by the United States Air Force Honor Guard and Franklin American Legion Post #205 Honor Guard. Online condolences may be sent to the family at www.swartzmortuary.com. Information at 317-738-0202.

The insignias listed here may be subject to copyright and / or trademarked. Those copyrights and trademarks are owned by the respective organizations.

We encourage you to share any memorable photos or stories about Clyde. All tributes placed on and purchased through this memorial website will remain on in perpetuity for future generations.

CF
I have enjoyed are our visits during the week. It has been such an honor to have assisted this wonderful Kentucky hillbilly. I have truely been blessed to have gotten to know Cindy, Bart and Dan during these past few months. Know that Clyde was able to spend his birthday with his lovely wife.
Sincerely Charlene
Charlene Franklin - Saturday August 11, 2018 via Condolence Message
Share This:

May you now rest peacefully with your beautiful wife. Know that that you are loved and missed.
Charlene Franklin - Saturday August 11, 2018 via Memorial Candle
Share This:

MP
Cindy, Suzanne let me know that Uncle Bud passed away. I know that saying goodbye is never easy and I'm so sorry for your loss. Your family will be in my thoughts and prayers. 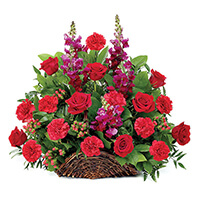 Our thoughts and prayers are with you during this difficult time. We are sorry for your loss.
Elena, Melinda, Lisa & Danny - Tuesday August 07, 2018 via Heartfelt Sympathies
Share This:
1
Page 1 of 1
Share
×

Thank you for sharing!

Provide comfort for the family by sending flowers.

View Video
Send flowers to the family
Choose from beautiful standing, table and basket arrangements. Safe and secure online ordering.
View Flower Arrangements
What has already been purchased for the family?
Family Log-In

Connect with families at their time of loss. By subscribing to email updates, you will receive two daily updates containing all new stories, photos, candle lightings, condolences, and more.